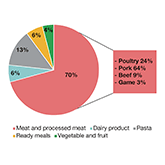 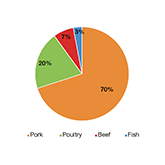 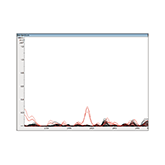 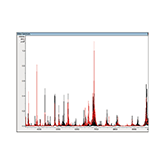 Investigation of the antibiotic resistance of staphylococcus species isolated from foods

The presence of methicillin-resistant Staphylococcus aureus (MRSA) strains in the food chain has been confirmed by several studies in the European Union, but there are only limited data available in Hungary. The objective of the present study was to investigate the antibiotic resistance of Staphylococcus strains isolated from foods, using classical microbiological, molecular biological methods and the MALDI-TOF-MS technique, as well as the multi-locus sequence typing (MLST) of antibiotic resistant strains. During the study, 47 coagulase-positive (CPS) and 30 coagulase-negative (CNS) Staphylococcus isolates were collected. In the course of the MALDI-TOF-MS investigations, all CPS isolates (n=47) were found to be S. aureus species, while 8 different species were identified in the case of the CNS strains. Methicillin resistance was confirmed in two S. aureus strains, one of which had a sequence type not yet known, while the other MRSA strain was type ST398, which is the most common type of MRSA strain isolated from farm animals in the EU/EEA.

(The abbreviation “MRSA” is often used in common parlance, but occasionally in the literature to denote “multidrug-resistant Staphylococcus aureus”. In the authors’ manuscript - the methicillin-resistant pathogen is correctly designated as such. Ed.)

The number of nosocomial infections caused by antibiotic-resistant microorganisms has been increasing in all countries, thus posing a greater and greater challenge to the health care system [1, 2]. The situation is further exacerbated by the fact that antibiotic-resistant Staphylococcus species have already appeared not only in communities and health care, but also in intensive animal husbandry and thus in the food chain [3].

The presence of methicillin-resistant Staphylococcus aureus (MRSA) strains in the food chain has already been reported in several studies. Some of their authors examined strains isolated from food samples of animal origin, others investigated strains isolated from raw meat samples (pig, fish, poultry). In the Netherlands in 2009, 2,217 different food samples were analyzed, 12% of which contained MRSA strains [7], while in a Danish study 4.6% of 153 pork samples and 7.5% of imported pork samples were infected with MRSA strains [8]. MRSA strains have also been identified in Germany in raw milk, pork, turkey and broiler chicken [9]. In Hungary, 27 MRSA isolates were identified in the 595 individual milk samples of a dairy farm [10], while in another study only 4 strains out of the 626 S. aureus isolates of 42 farms proved to be methicillin-resistant [11]. However, beyond these examples, the presence of MRSA in foods from other categories and ready-to-eat foods has not been investigated so far. Molecular typing results of the strains have shown that many types of MRSA are present in the food chain in different countries [12], but the most common type is CC398, accounting for 85% of the MRSA strains isolated from farm animals in the EU and the EEA [13, 14, 7,15].

In the European Union, testing for antibiotic resistance in Staphylococcus strains isolated from foods and farm animals is currently voluntary, so in 2016 only Germany, Switzerland, Denmark and Spain reported information related to this topic. The incidence of MRSA varied from country to country, but in the case of a comparison it should be taken into account that the studies were performed on strains isolated from different animal species, meats and meat products [18]. A small proportion of human infections can be traced back to MRSA strains of the CC398 type, and they are also mainly limited to occupational exposures, such as veterinary medicine and intensive animal husbandry. Nevertheless, the virulence factors detectable in CC398-type MRSA strains allow for high pathogenicity, so continuous revision is essential both in animals and in foods [19]. The need for surveillance is also justified by the possible presence of antibiotic resistance of other Staphylococcus species, which allows for the spread of resistance and poses a risk to consumer health.

A prerequisite for a successful surveillance system is the availability of a uniform, economically acceptable, rapid and reliable method for the species-level identification of the microorganisms and the determination of antibiotic resistance, a promising cornerstone of which could be matrix-assisted laser desorption ionization time-of-flight mass spectrometry (MALDI-TOF-MS) based on peptide identification. In the early 2000s, several studies reported specific fragment ions that allow rapid identification of antibiotic-resistant Staphylococcus strains. The most often studied biomarker was the fragment ion with an m/z value of 2,414, the appearance of which in the mass spectrum correlates with the expression of psm-mec, characteristic of MRSA strains [20]. The applicability of the 2,414 m/z fragment ion for detection and discrimination has been demonstrated in several studies [21, 22].

The objective of our own experiments was to investigate the methicillin resistance of Staphylococcus strains isolated from foods using classical microbiological, molecular biological methods and the MALDI-TOF-MS technique, as well as the multi-locus sequence typing (MLST) of antibiotic-resistant strains for the epidemiological study of the strains.

3.1. The isolates collected and culture conditions

77 Staphylococcus isolates, isolated according to the requirements of standard MSZ EN ISO 6888-1:2008, were analyzed in the Microbiological Laboratory of WESSLING Hungary Kft. in the period between August 2019 and September 2020. The isolates were grown on a Baird-Parker (Biokar, France) selective culture medium at 37 °C for 24±1 hour and colonies characteristic of Staphylococci were inoculated onto Columbia blood agar (Neogen, UK) (37 °C, 24±1 hours). In the course of culturing, 47 strains showed a positive coagulase reaction, while 30 isolates proved to be coagulase-negative, which was also confirmed by a latex agglutination rapid test (PASTOREX™ STAPH-PLUS). Isolates were collected from raw meat, meat products and ready-to-eat foods: poultry (n=14), beef (n=5), pork (n=42), game (n=1), fish (n=1), dairy product (n=3), ready-to-eat foods (n=3), vegetables (n=2) and dry pasta (n=6).

3.2. Identification of the isolates using the MALDI-TOF-MS technique

The 77 isolates collected were identified using a Bruker Microflex LT MALDI-TOF mass spectrometer and the MALDI BioTyper 3.1 (Bruker Daltonics) software. A formic acid suspension protocol was used in which a single colony was collected from the Columbia blood agar using a sterile loop, and then it was suspended in 40 µl formic acid. To the suspension was added 40 µl of acetonitrile, 1 μl of which was applied to one of the positions of the plate. After the solvent evaporated, 1 μl of α-HCCA (10 mg/ml α-Cyano-4-hydroxycinnamic acid) matrix solution was applied and the solvent was allowed to evaporate once more. 6 parallel measurements were performed for each sample.

3.3.1. Investigation of the methicillin resistance specific peaks by the MALDI-TOF-MS method

When examining the antibiotic resistance of the strains, the guidelines of the CLSI (Clinical and Laboratory Standards Institute, 2019) were followed [25]. A bacterial suspension equivalent to 0.5 McFarland unit was applied to the surface of a Mueller-Hinton agar (Oxoid, UK), and then Cefoxitin 30 μg disks were placed on the surface of the medium. The strains were incubated at 37 °C for 18 hours. In the case of MRSA strains, the reference range of the clearance zone was 6-19 mm volt, while for mecA negative species it was 20-32 mm.

In addition to the above, CHROMagar MRSAII selective differentiation medium (BD, UK) was used for the detection of methicillin-resistant Staphylococcus aureus species in the antibiotic resistance assays. Isolates were incubated at 37 °C for 24 – 48 hours under aerobic conditions. Strains that formed mauve colonies, morphologically similar to those of Staphylococci, were considered MSRA bacteria. The disk diffusion method (Cefoxitin 30 µg) and the MRSA CHROMagar assay were repeated twice for each strain isolated from a food (n=77). During the study, the reference MRSA strain ATCC 33591 was used as a positive control and the MRSA strain ATCC 29213 was used as a negative control.

Detection of the mecA gene was performed according to the protocol of the Danish National Food Institute (NFI), published in 2012 [26]. During the study, MRSA strain ATCC 43300 was used as a positive control and MRSA strain ATCC 29213 was used as a negative control. Genomic DNA was isolated from the bacteria and the mecA gene sequence was amplified using PCR. The primers used are listed in Table 2.

According to the study of Thomas et al. [27], genomic DNA was isolated from the bacteria, and then the gene sequences specific for the 7 Staphylococcus aureus species were amplified using PCR (Table 3). The nucleotide sequences of the purified PCR products were determined and the sequence data were evaluated in the BioNumerics 7.6 software.

4.1. Identification results of the isolated strains

In the MALDI-TOF-MS study, all coagulase-positive Staphylococcus (CPS) strains (n=47) were found to be S. aureus species (Tables 4 and 6). In the case of coagulase-negative Staphylococcus (CNS) strains, 8 different species (S. xylosus, S. saprophyticus, S. pasteuri, S. epidermidis, S. warneri, S. chromogenes, S. piscifermentans, S. haemolyticus) were identified (Tables 4 and 7). 30% of the CNS isolates (n=30) were found to be S. warneri species, while 23% were found to be S. pasteuri species. 70% of the S. aureus strains and all of the CNS strains were isolated from meat and meat products (Figures 1 and 2). In the case of S. aureus strains, 64% of the meats and meat products came from pigs, while this was true for 70% of the CNS strains. Within meat and meat products, the distribution of isolates coming from poultry and beef was nearly the same.

4.3. Results of the disk diffusion method and the MRSA CHROMagar selective differentiation agar

Based on the results of the MALDI-TOF-MS analyses, the disk diffusion method and the MRSA selective differentiation medium, it was found that the S. aureus strains isolated from goose liver and pork butt (SA-17, SA-47) carry methicillin resistance, and this was confirmed by the mecA gene responsible for PBP2a synthesis, which could also be detected in the two strains (Table 6).

4.5. MLST types of the MRSA strains

During the study, 77 Staphylococcus isolates were collected from various food matrices according to the methods described in standard MSZ EN ISO 6888-1:2008. Although the standard allows the separation of coagulase-positive and coagulase-negative Staphylococcus species, it does not allow species identification, which is significant because of the different virulence factors and pathogenicities of the species. Identification of the 47 coagulase positive and 30 coagulase-negative Staphylococcus strains isolated from foods was performed using the MALDI-TOF-MS technique, with high identification log score values. In addition, by analyzing the mass spectra obtained and based on methicillin resistant-specific ion fragment values determined in previous studies, methicillin resistance was found in two S. aureus strains, which was confirmed by the disk diffusion method, selective differentiation agar and the detection of the mecA gene. Thanks to the specific ion fragment values, the diagnostic time can be significantly reduced, which is not negligible from economic and therapeutic points of view. However, it should be taken into consideration that due to the high variability of MRSA strains, the sensitivity and specificity of these ion fragment values are not 100%, so confirmatory studies are required.

Multi-locus sequence typing (MLST) of the two MRSA strains isolated from foods was also carried out for the epidemiological study of the strains. The isolate coming from pork belonged to type ST398, which is the most common type of MRSA strain isolated from farm animals in the EU/EEA. However, taking into account the specific host adaptation capabilities of type ST398 strains, which allow them to adhere not only to pigs, but also to other animal species and the human body, contamination and infection may occur in a number of ways during the technological steps in food processing.

Given that 2 of the 47 S. aureus strains isolated from foods proved to be methicillin-resistant, this fact confirms the dangers posed by globally increasing antibiotic resistance, thus indicating the severity and urgency of the situation.

This study was carried out with the professional support of WESSLING Hungary Kft., BIOMI Kft. and the New National Excellence Program of the Ministry for Innovation and Technology, code no. ÚNKP-19-3-III. 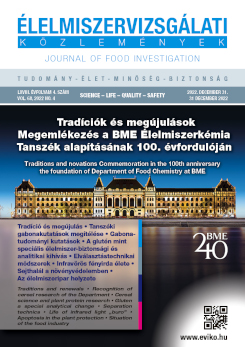